Dogs can be the most loyal friends not just to people but to other dogs as well. Stray dogs often stick together and help each other survive. One example is the story of Haeng-bok and Haeng-oon, who shared a deep bond.

Haeng-oon came across Haeng-bok while she was wandering alone. At that time, the latter had just given birth to a litter of puppies. They stayed together at an abandoned warehouse.

One day, something tragic happened. The place they were staying at was close to a busy road. While Haeng-bok was outside looking for food, she got hit by a car. Haeng-oon never knew what happened, so she waited for the return of her best friend.

Haeng-oon nursed her friend’s puppies in her place. She also kept coming back to the last place where she saw her. Taking care of a deceased friend’s children is not an easy task, even for dogs. One could only really imagine how hard it was for her.

One of the rescuers returned to the warehouse and heard a bark. He discovered that one puppy was hiding inside the canal. The rescuers had to insert a tube in the canal to push to puppy out.

After receiving treatment, Haeng-oon and her puppies were placed in the same enclosure. If ever Haeng-bok saw her friend. She would be happy and proud that her puppies were being taken care of. 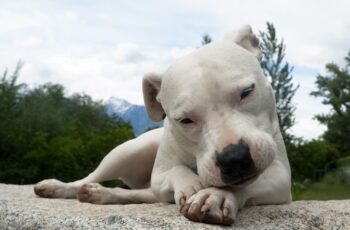