A little act of kindness can make a significant impact on the world.

A security guard from a popular grocery store in the United Kingdom showed his kindness to a dog who was getting wet due to non-stop rains.

Ethan Dearman, a security guard working at Morrisons, is doing his usual job on that day: monitoring the people’s activities coming to and from the grocery store and maintaining the peace and security within the area. Ethan is an individual who does his job wholeheartedly.

Meanwhile, while Ethan was busy doing his job, he saw a dog, a Golden Retriever, tied to one of the poles outside the grocery store. The dog’s owner made a quick stop to get some necessities and left the dog outside the building.

Unfortunately, it suddenly rained. The dog was getting wet from the rain, and the owner hasn’t gone back yet.

Not thinking twice, Ethan offered his umbrella to the dog. He held the umbrella over the dog’s head so that he won’t get wet. Ethan felt that the dog needed more protection than him. 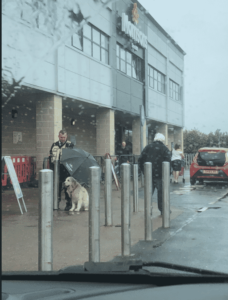 What made the scene more heartwarming was that the dog looked happy and grateful for the kindness that Ethan had extended to him.

The act of kindness that Ethan showed to the dog was caught on camera. A shopper took a snapshot of Ethan and the dog and was shared on Twitter. A day after it was posted, it garnered more than 96,000 likes and 12,000 retweets!

Ethan learned about the viral photo. Ethan said that he was grateful that he could make others happy when he did a simple act of selflessness.

Later on, it was found out that Ethan was a dog lover. Ethan had a dog named Sanchez. Sadly, his beloved dog incurred a leg injury. Ethan posted an update on Twitter that his dog was slowly recovering. 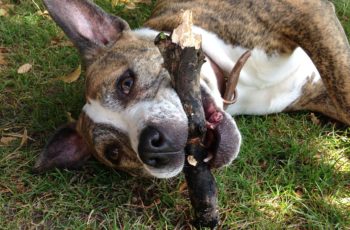 As kids, we had always wanted to be superheroes just …

Canines love munching on every delicious morsel they see. And …